Wedding of the Week: Bayley & Doug

Doug and Bayley met at work. Bayley and Doug both work in the culinary field at Walt Disney World, Bayley specializes in pastry :). Doug and Bayley have different versions of how they met, so we’ll let you read both.

Bayley’s version: Bayley had only been working at Disney for a few months and was shifting between restaurants, so she went to the restaurant Sana to shadow the pastry chef assistant and see if it would be a good fit. The pastry chef assistant was showing Bayley around and she noticed this cute guy working the line but didn’t think much of it. A mutual friend at work started to ask Doug and Bayley about the other and eventually told each of them that they liked each other, without any real confirmation from them. As the days went by, Doug and Bayley slowly started talking more and more and eventually went on their first date. This was originally supposed to be a co-worker rendezvous, but with everyone else bailing on the plan, Doug and Bayley were somehow the only attendees…little did she know that everyone was trying to set them up. But their co-workers were right, they clicked!

Doug’s version: Doug was standing on the hotline in the kitchen preparing his station for service when their pastry chef assistant walked through the kitchen with this girl. The pastry station was in a different part of the kitchen and he worked early so it was unusual for him to be there at that time. Doug knew the pastry chef had been looking for new help, so Doug looked a little closer than he would have under any other circumstances. That’s when he saw Bayley; He says, “my friend Joe must have seen my jaw hanging open because he came over to me and asked what I was doing.”  Joe was one of Doug’s best friends and definitely a ladies man, so he thought it prudent to express his interest in this beautiful young woman who had wandered into his line of sight. He turned to Joe and said, “You see that pastry girl walking through the kitchen?” He replied yes. “Joe, she’s mine. I’m calling dibs.”

& the rest is history. 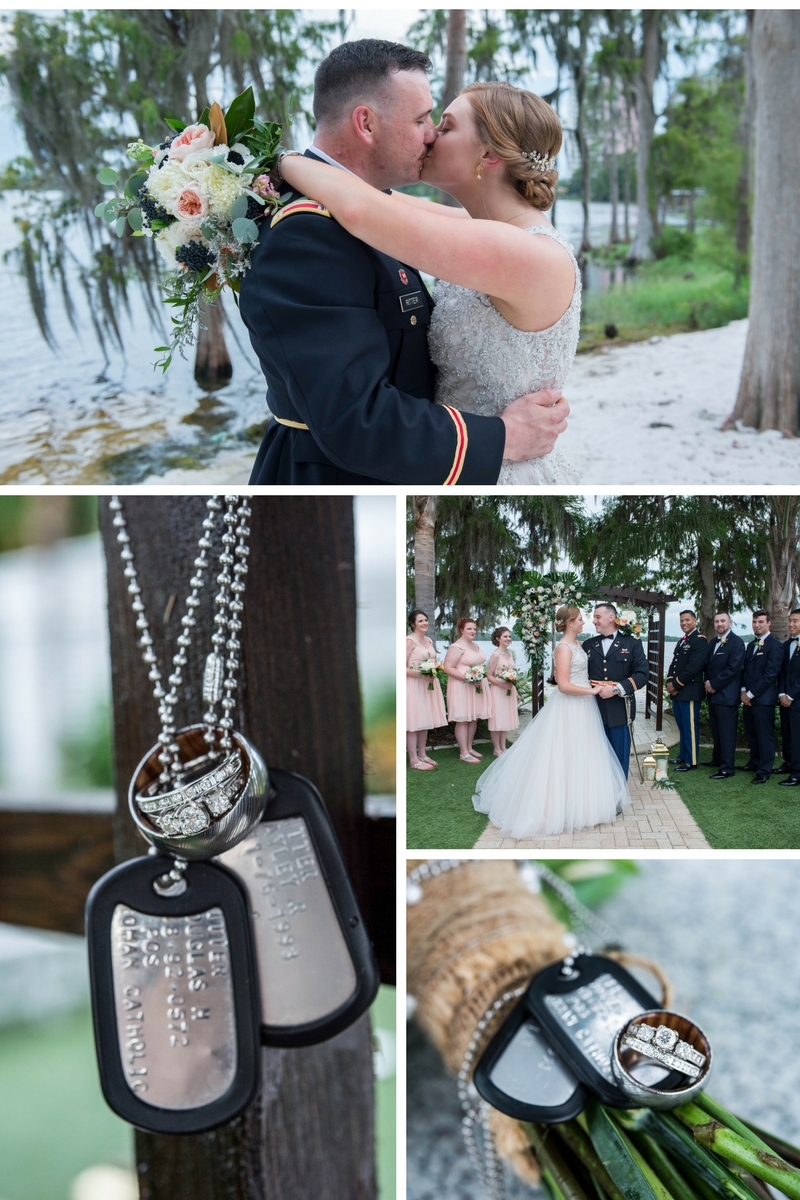 Doug and Bayley wanted to decorate the Christmas tree at Doug’s house together. They were trying to find a good time to do it and settled on one morning. The day prior, Doug was off and Bayley worked the evening. Doug asked if they could actually do it that night after Bayley got out of work, so she said “sure” and came over. They put on some Christmas music, made some hot chocolate and began decorating the tree. Bayley eventually noticed that Doug wasn’t decorating anymore, but didn’t read into it too much. Doug told Bayley there was one more ornament in the tin on the table that he wanted Bayley to get and open. Bayley did, and the first thing she saw was a pair of dog tags, which read “Bayley Ritter.” This was super sentimental as  Doug asked Bayley to wear his while they were dating.

Bayley immediately knew what was coming. There was a small black box under the dog tags that Bayley took out and opened. Surprise, it was a ring box 🙂 Doug then took the ring, got on one knee, and proposed to Bayley. Apparently, Bayley’s first words were “Really?” (in a tone of disbelief) and then “YES!”

“We found Paradise Cove and loved it! We used some of the tropical elements from the location in the decorating like some tropical foliage in the flowers, and using pineapples on the tables. But we didn’t want to go total Hawaiian/Luau type feel so we kept that minimal. Doug is also in the Army, so we used navy blue as a main color to incorporate his Army Service Uniform. Our colors were navy blue, blush and gold.” 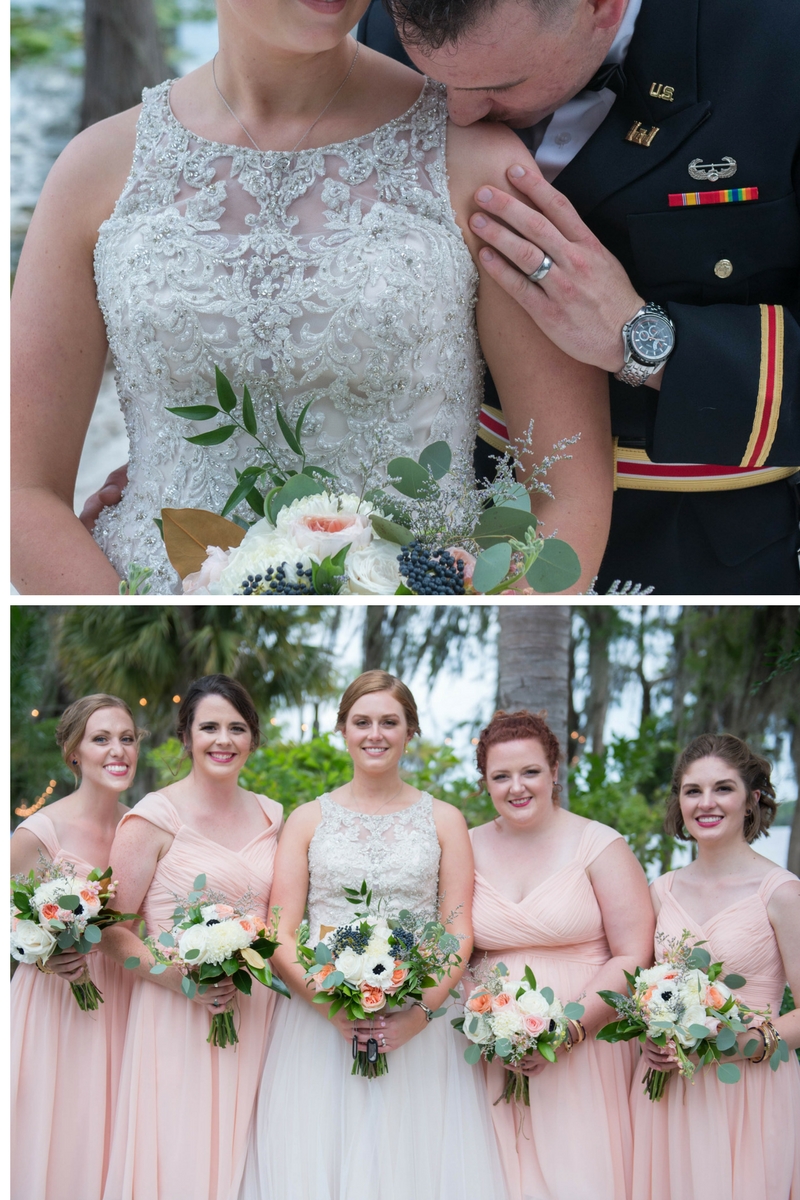 D.I.Y. Details
“The biggest one was probably the 3 fold screen that we put cork board and black poster board on, and then filled with pictures of Doug and I. The left panel was baby through college pictures of me and the right panel was baby through college pictures of Doug, and the middle panel was pictures of Doug and I from our first date to our engagement pictures. I also wrote the chair signs we used, they said “An Officer” “And His Lady”, and the reception sign. My bridesmaids made our fan programs, and wrote on our boxes used for cards and glow sticks and such. My bridesmaids and another good friend made all the elements for our center pieces (gold pineapple and garlic, the bouquet arrangements, gold sprayed candles). “ 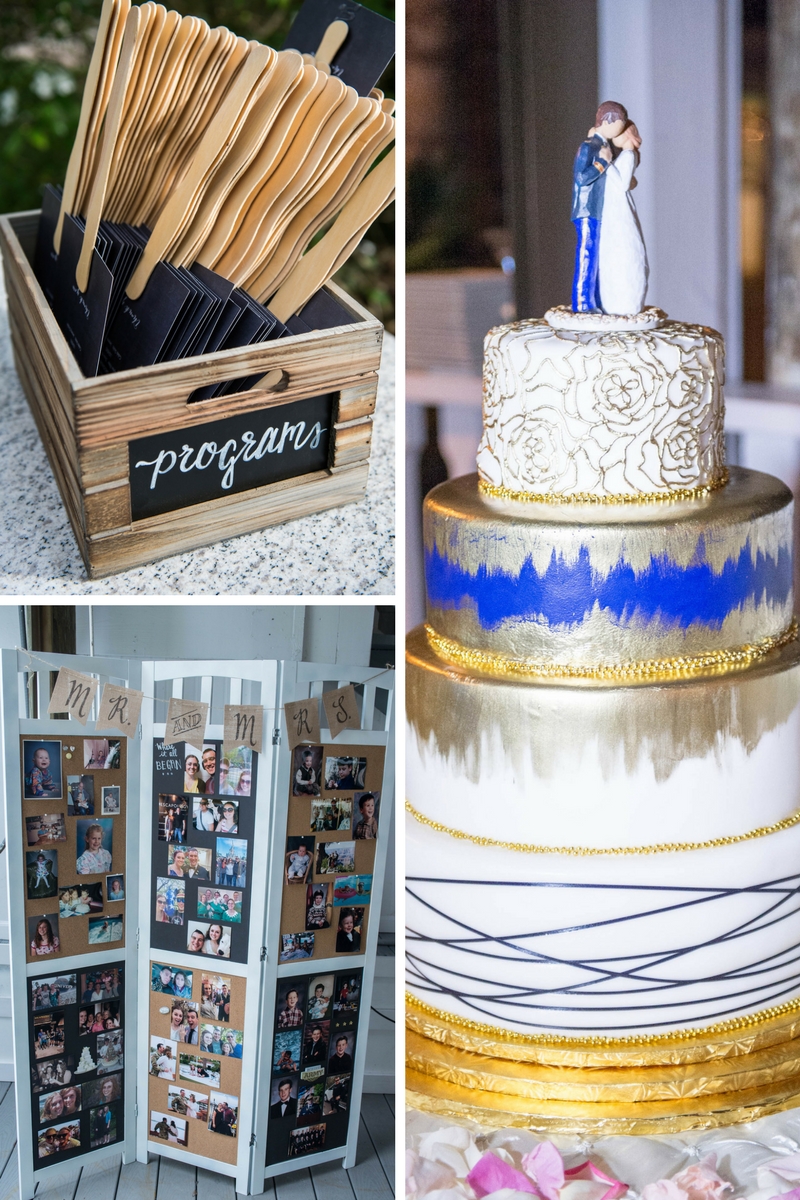 Favorite Wedding Memory
“Doug’s favorite memory is sailing in on the boat to the song ‘Flight of the Valkyries’, with his new saber in hand, for his grand entrance. The saber was his wedding gift from me with his name engraved on it. A fun memory for me was seeing the cake. I am a cake decorator and my co-workers made the cake for us and did an awesome job! It had a lot of gold elements with some navy blue on it. And it tasted delicious too! Another great memory was just looking out at all of our guests and seeing all the different people that came to celebrate with us from so many different aspects of our lives. It really meant a lot to us to see that. “

& a Word of Advice…
“Don’t panic. Yes it feels like there are a million things to get done, but just breathe and take it step by step. Slowly everything will get done, and some things you just have to be patient for. Also, don’t worry about the small things on the day of. Everyone else will be doing that for you. Just enjoy your day! I was able to do that, and it really made it so much better. Yes, a few things did go ‘wrong’ but it really didn’t matter. We just made a few adjustments and moved on. After all, Doug and I still got married and that’s all that matters!”

Venue: Paradise Cove – Orlando FL
“Day of Coordinator: Kayli B.- helped with all venue details and rehearsal, and set up everything day of. She was awesome to work with and very helpful and professional. She answered all of our questions in a timely manner and gave us great tips and suggestions for the day of schedule and such.”

Catering: Millenia Catering – Vineland Road Orlando, FL
“We worked with Tonya B., who handled all of our questions and helped us set up our menu and table linens and things. They did a great job and we got so many compliments on how great the food was. They also did a phenomenal job accommodating guests with serious dietary allergies with no issues and high-quality food!”

Florist: Blossoms Orlando Floral –  Orlando, FL
“Amy L., our florist, made all our bouquets, boutonnieres and corsages, and did the flowers on the arbor. She did an amazing job and blew me away with how beautiful it all was. She even brought some extra flowers day of and added them to the lanterns and other decor. “

DJ: Aussie Dave
“He is a friend of my sisters from her work. He is a great wedding DJ! He ran a great event, kept us on task and on time. He has a wonderful personality for DJ-ing and knows how to read and relate to a crowd and get them up and moving! He helped put out some fires and even accommodated a last minute request from us (dollar dance, which is kinda fun).”