Wedding of the Week: Claire & Alejandro

Claire and Alejandro met when a mutual friend, one of the bridesmates, invited Claire to join Alejandro at a party. Claire was excited and got all dressed up ready to go have a wild night. But when they arrived, it turned out that it was actually a low-key *dinner* party! Alejandro was hosting and had prepared tons of delicious food. Luckily he was a gracious host to this uninvited guest and added a place setting. Years later, Claire and Alejandro finally started dating and Alejandro has been preparing incredible meals for them ever since (and Claire cooks too sometimes!).

In May 2017, Alejandro was in Alabama for six weeks for some training (he’s in the military). At the last minute Claire and Alejandro decided that Claire should come visit for a weekend. The night before her flight, Claire was chatting with Alejandro and mentioned that she felt like she should wear sweatpants in the plane. But Alejandro encouraged her to wear something nice. After some back and forth, Claire realized that something was up and then started up late primping herself and at out Alejandro’s favorite dress for the next day. During Claire’s flight, Alejandro was involved in a competition in his training and ended up leaving early to go to the Post office to pick up something he needed for the proposal that almost didn’t arrive in time. Claire learned after the fact that Alejandro’s side of the story was very rushed and fill of close calls! In fact, the ring almost didn’t arrive on time. After Alejandro picked Claire up from the airport, they had a 2.5 hour drive to Pensacola. Alejandro had been acting pretty weird and Claire had guessed that he might be proposing, so things were fairly tense! About 30 minutes away from the beach, Alejandro have Claire a riddle that he had written and asked her to figure it out. “From first of first, to first of last, in this land of whimsy, thanks to a blast, the middle of which is plain to see, from the start have been we.” Well, Claire was stumped. When Alejandro offered Claire a home she gladly accepted. But the hint was just a cryptex (a container opened by spinning dials to spell out a code word). The answer eluded Claire. She still couldn’t figure out the riddle, but she knew the answer to open the cryptex would be 5 letters. So she desperately tried “Marry,” “Rings,” “Wifey.” Nothing worked. And suddenly Claire wondered if she had misread the situation and this wasn’t a proposal after all! After some more awkward driving and then walking along the beach, Alejandro stopped and explained the riddle to Claire. The answer was “Fools,” a not to their some, Can’t Hello Falling In Love (“wise men say only gold Rush in…”). At that moment, Alejandro opened the cryptex, took out the ring and got in one knee, and a ukulele player began playing and singing the song! It was all so perfect! 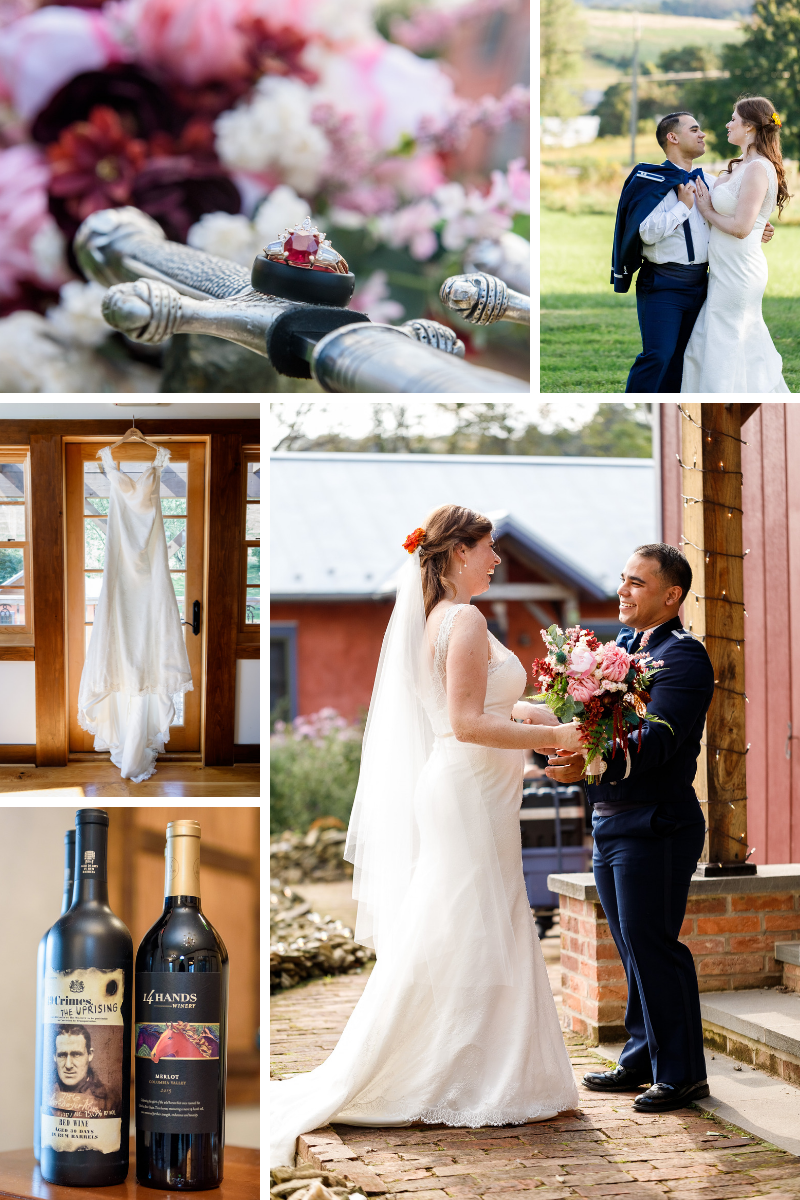 Wedding Inspiration
“Claire’s engagement ring (a ruby) and our favorite season (autumn, especially Thanksgiving) inspired our starting point. Everything played off of deep burgundy with gold and navy accents. And because our wedding was on a beautiful, sustainable farm, we wanted to let nature rule the day. So we found a caterer with sustainable, local, seasonal offerings, our stationery used a simple theme of leaves, and everything had a natural elegance.”

Favorite Wedding Memory
“Our favorite parts of the day were the times that we got to enjoy the company of our favorite people. The dances and toasts were touching, Alejandro had a great time snagging a bottle of whiskey from the bar to share with his cousins, and we were so grateful that our venue was also the lodging for our entire bridal party. But the best part was when we got to have our little moments alone. During cocktail hour we took portraits just the two of us, and then we went into our private cottage to hang out with our two dogs.” 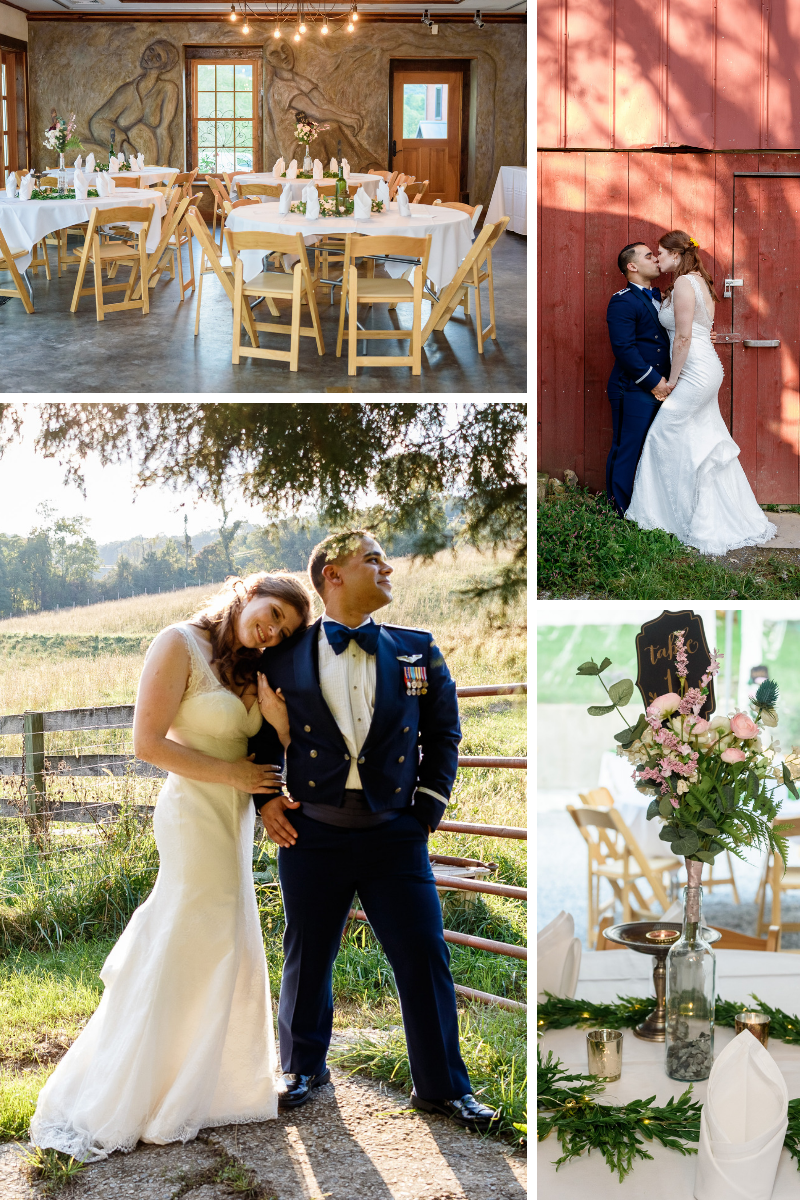 D.I.Y. Details
“We designed all the stationery, DIYed all the florals with silk flowers and plastic garlands, sourced other decor items from thrift stores, infused our liquor for our own batch signature cocktails that had special meaning to us, and Alejandro cooled the entire rehearsal dinner.”

& a Word of Advice…
“Keep things simple. Don’t stress about that cute thing you saw on Pinterest. And make sure you take time to run away from the crowds and enjoy each other’s company.” 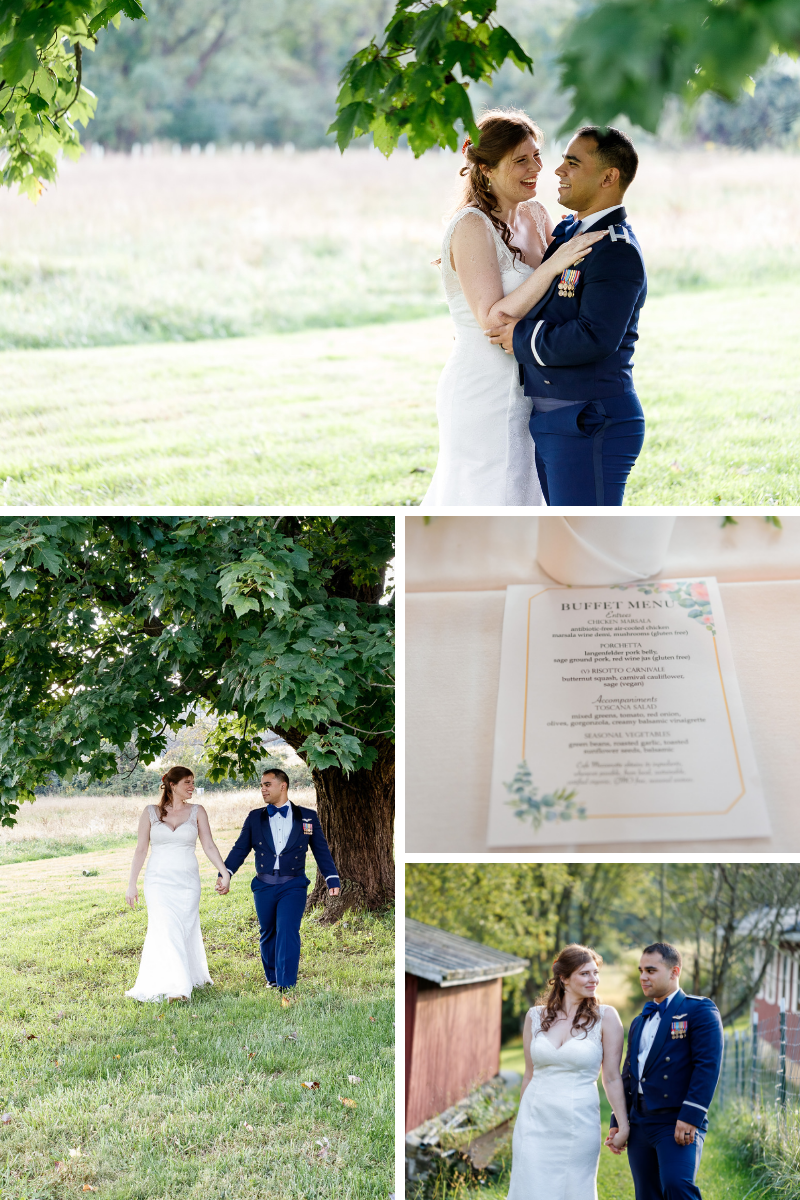