Wedding of the Week: Emily & Dana

Emily & Dana  met almost 10 yeas ago to the day at Reggae fest on Peaks a Island. She liked him, they had fun and danced and he was a riot. On their way back to the island when they were departing the ferry, She lost him in the crowd… and she didn’t get his contact info and was bummed. Then about 2-4 weeks later they were both at a party at their friend’s house. It turned out he was friends with the neighbors of Emily’s friend hosting the party and he showed up with them. She walked in the door and saw him standing at the counter in the kitchen, and she yelled “reggae dude!!!”. He then responded with a fist pump in the air while yelling “yea-ahhh!!”. They have been together ever since she found him at that party. That’s why it was so special for them to get married at the reggae fest location and it was great!

The Proposal
Dana proposed on Emily’s favorite holiday- St.Patricks Day. They were in their favorite Irish pub and in front of the stage where a band was about to play.., when he got real weird and quiet and said he needed to talk to Emily & he tried to pull her aside but it was so crowded, so they were still kinda in front of the stage. Dana says “I have to tell you something” and Emily’s thinking something bad just happened… and he gets down on one knee and pulls a ring out of a tiny plastic earring baggie he had in his pocket (he was afraid she would see the outline of the ring box… so he put it in a small plastic earring bag instead). She thought it was a fake ring and proposal (b/c it was St.Paddy’s & they had already had a few drinks….) and she thought he bought it on the street from some street vendors or something b/c of it also being in a baggie and it was so big and shiny- She thought he never would have gotten her a real big beautiful ring like that! So Emily told him to knock it off and shut up.. and laughed and said “what are you doing? Are you drunk? Did you buy that on the street outside?” He stays on one knee and said “no it’s real, I am serious”. By now- everyone around the stage and the band on stage not playing yet is watching and has formed a circle around them…. She still laugh and go- no! That’s fake, that’s not real, you are drunk and being silly!! And then her friends pop out from around Dana and all start saying, “it’s real!! No Emily this is real!! It’s happening!!!”.  She look down at the ring again and realize it is real and screamed, “Oh my God!! Yes” and put on the ring. All the people that had gathered around them starting hooting and hollering and screaming & clapping so loudly that Dana couldn’t really hear her answer and he goes, “what?! Sooo is that a yes?!” Looking all scared b/c he wasn’t sure what she had said. Then he stood up and she yelled, “yes!! Of course yes!!!” And they hugged and kissed and the crowd in the bar went wild around us screaming and clapping again. 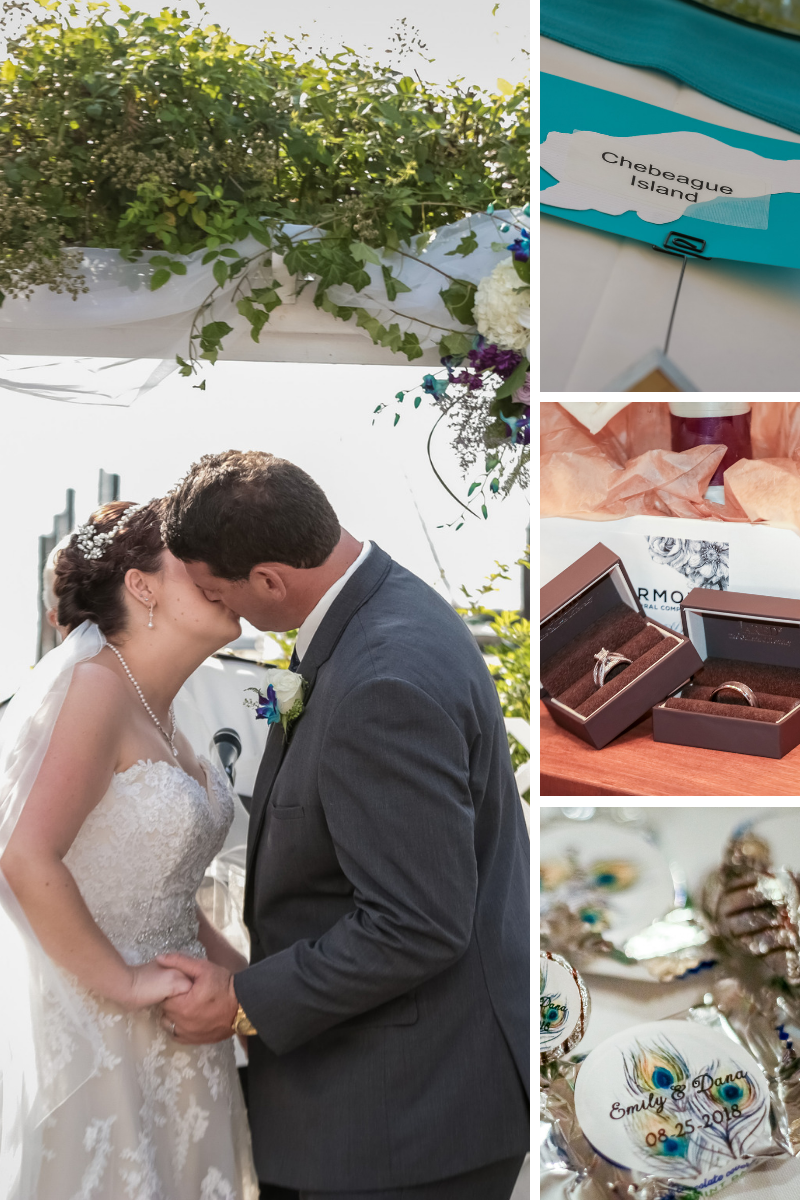 Wedding Inspiration
“Peacock theme and kind of Island Ocean colors. Where we got married is where we met almost 10 years to the day at The Harbor View Landing On Peaks Island in Maine – where they would do a special reggae Sunday concert party event every Sunday in the Summer. “

“We loved doing the couple photos out on the dock and by ourselves. The photographers came up with great ideas and shots for us to take. They really captured our love and made us laugh, so the photos are really genuine. “ 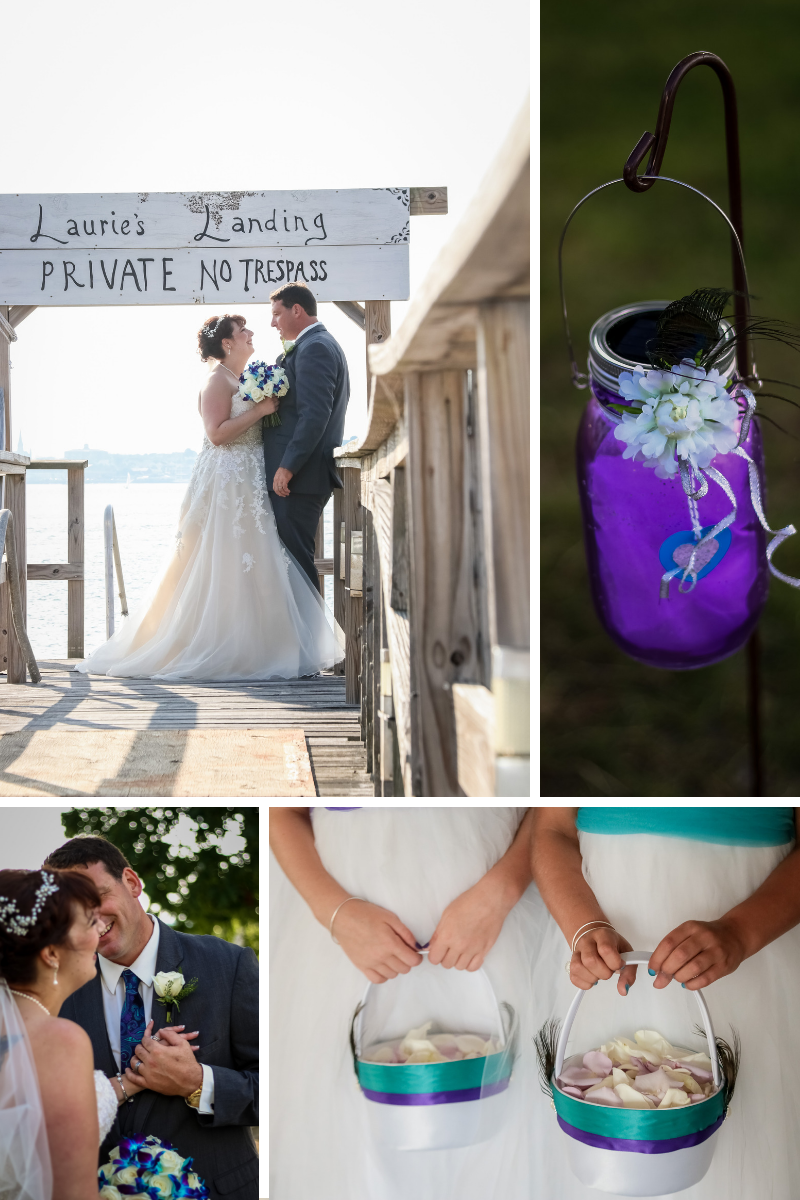 & a Word of Advice…
“Take time to enjoy it, make sure you have some quiet moments alone and away from it all to be together and just enjoy your day.” 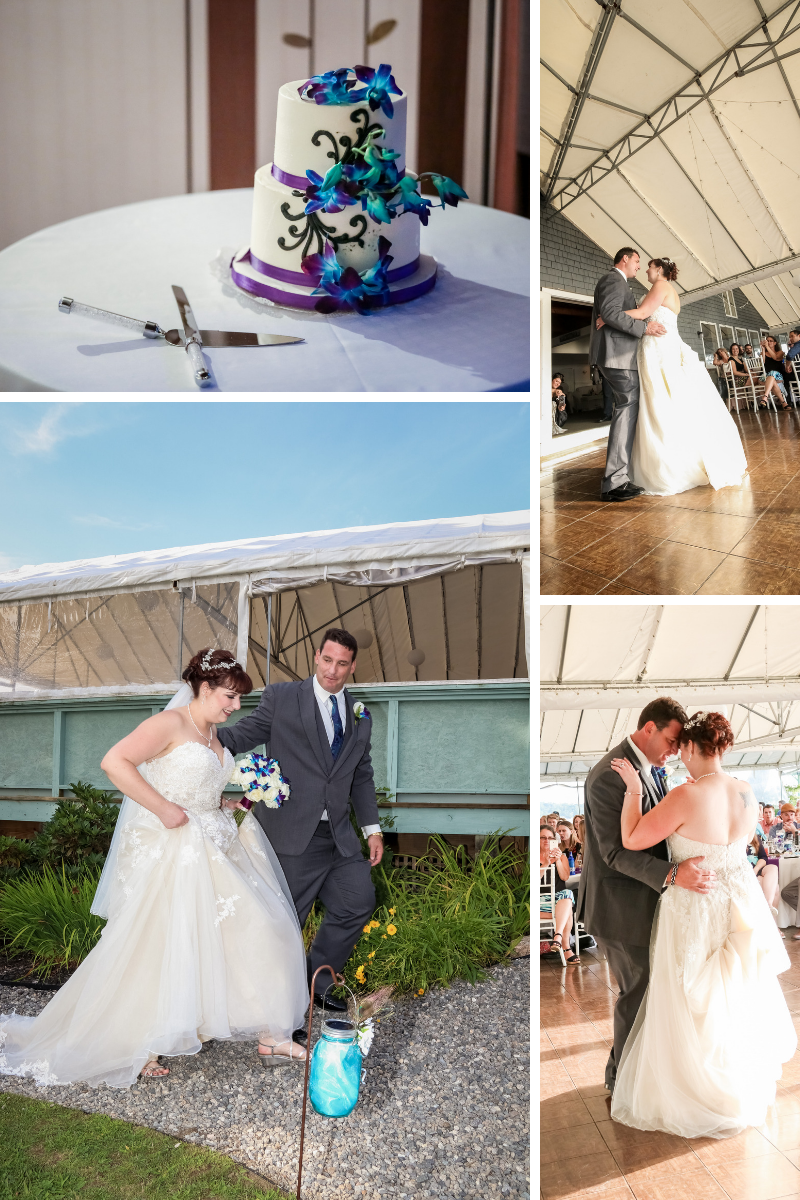 Make up: Makeup by Danaface , Portland ME

“Make sure you stay hydrated and eat! People keep grabbing you left and right and you need to make sure you eat and take care of yourself. “