Wedding of the Week: Kimberly & Kevin

Kimberly and Kevin went to high school together, graduated the same year, but neither of them knew the other person. She had Kevin’s mom as her CCD teacher one year and had classes with Kevin’s sister in high school. It wasn’t until they were in college that Kevin came up on her “people you may know” on Facebook. She had never heard the name or seen him but it said they had 100 friends in common so she decided to send him a friend request. He messaged Kimberly immediately saying they needed to catch up. From that day on, they talked from when they woke up to when they went to bed. A few weeks after was their winter break so they made plans and went on their first date. Now they finally have each other.

The Proposal
Kevin took Kimberly into Boston for the night on a “mystery ride” after she got out of work. Kevin loves surprising her so she didn’t think anything of it and just assumed they were going into the city for dinner. When they got there they parked and walked through the Commons to see the Christmas lights in the trees. There weren’t many lights in the part where they were but Kevin kept insisting they take it all in. Kimberly, on the other hand, kept insisting they head to go to dinner. After several minutes of her looking at the lights and questioning Kevin’s fascination, he took a small box out of his jacket, got down on one knee and asked Kim to marry him. It couldn’t have been more perfect. 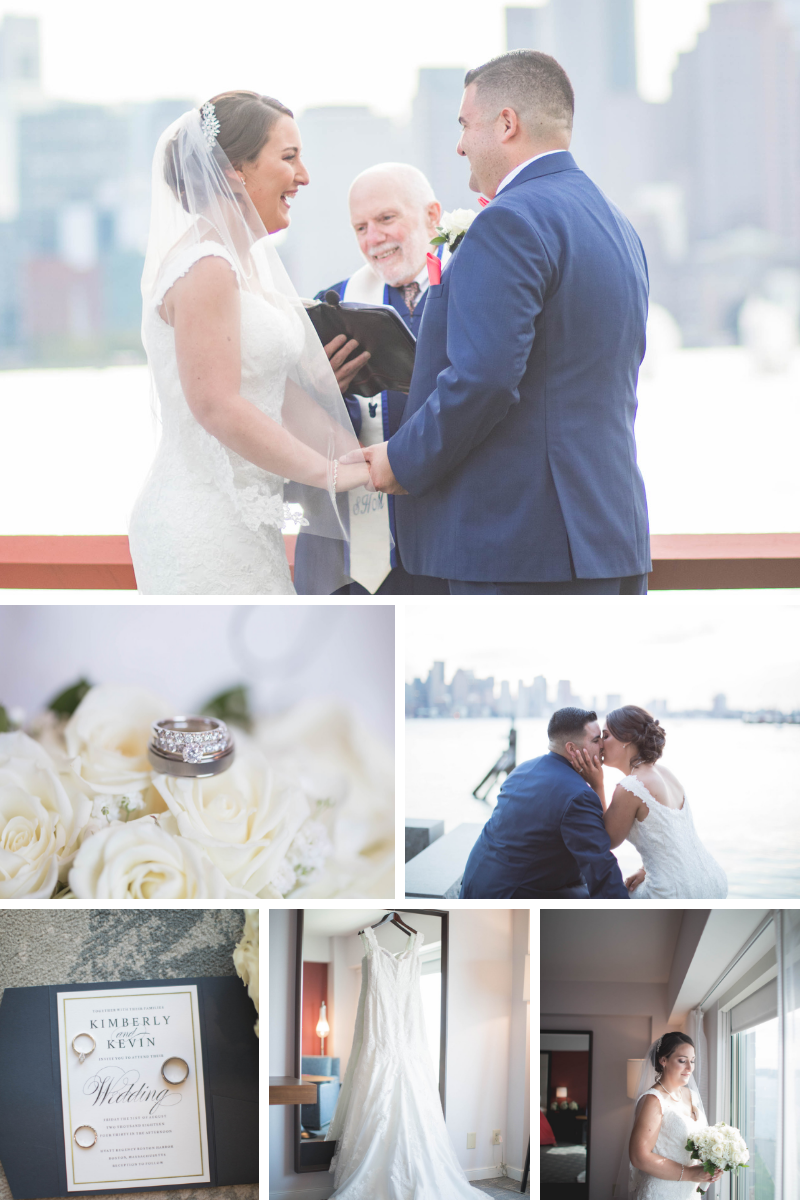 Wedding Inspiration
“We love the summer and the beach so we wanted to go for a coastal/nautical theme. “

Favorite Wedding Memory
“Kevin’s father was in the Navy and was on the ship next to where Cher filmed her music video for “turn back time” so we cleaned his navy cap and had the DJ play the song to bring back the good old days for him. Kevin went to Norwich University in Vermont and it was a common thing with his buddies to “ice someone” which means you hide a warm Smirnoff ice and when the person finds it they have to get down on one knee and chug it. To keep the tradition going I hid one in my garter belt so when he went to take it off my leg he found the bottle and had to take a knee and chug it in front of everyone. Everyone kept telling Kevin and I during the planning that the most important thing to do was to take a few minutes to ourselves to really take in the day. And that’s exactly what we did! While our guests were dancing and enjoying themselves we snuck away for 10 minutes just to celebrate and talk about the day. We would recommend that to every couple! “ 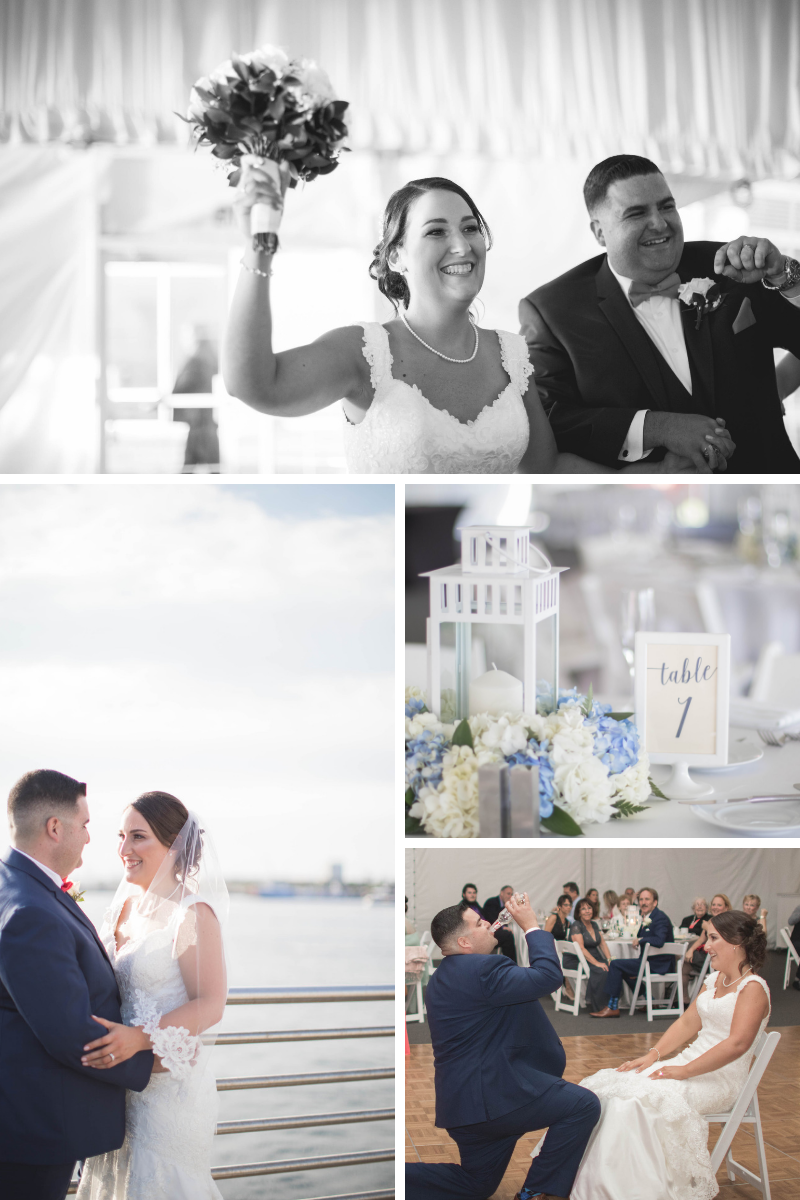 D.I.Y. Details
“D.I.Y. isn’t really my area of expertise so I wanted to keep it to a minimum. One thing that I did design myself was the seating chart. I told a collage of picture frames, Kevin painted them gold for me and then I used a template to make the table numbers and list guest names.”

& a Word of Advice…
“Don’t take it too seriously. The day is going to be perfect but it’s also going to go by very quickly. All the hard work and planning you did goes in the blink of an eye. Give yourself enough time during your engagement so you can spread out the details. The small things that you decided to put off til the end turns into big things when they all pile up. Some things you have to leave til the end but if you get the other things out of the way it doesn’t seem so bad. “ 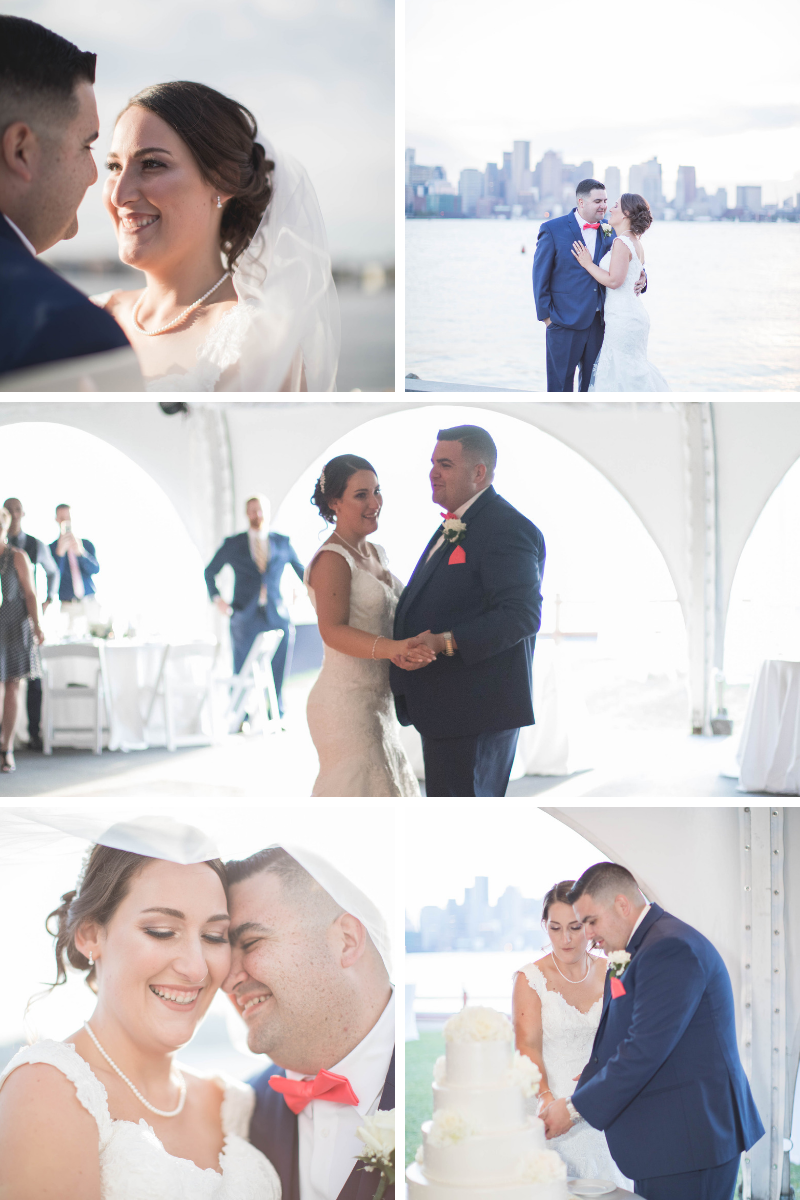 “We headed into Boston two days prior to the wedding so we could relax before the big day. It was hot and humid and we were nervous about what the weather would be on our day. The night before, we had our rehearsal dinner at the venue and Boston had a “light up the harbor” with fireworks to celebrate the end of summer and the start of school. But if you ask me, the fireworks were in celebration of our big day! The weather on our day was 75, zero humidity and blue skies! It couldn’t have been more perfect. The day after the weather was back up into the high 80’s with humidity. We still don’t know how we got so lucky!”