Wedding of the Week: Scarlett & Edgar

Scarlett and Edgar met in college at a college party. They quickly became friends as Scarlett was not interested in pursuing a relationship at that time with Edgar. Edgar persisted for a year and became her best friend. He helped Scarlett move in and out of her dorm, fixed her car door which kept leaving her locked out and was a shoulder to cry on through all Scarlett’s college drama. Through some convincing from Scarlett’s friends, She decided to give her BFF a shot at becoming her boyfriend. They both wanted to be financially stable before tying the knot in order to be able to better afford all the expenses that come with getting married. 10 years later they finally made it down the aisle and got to celebrate with their families and closest friends. 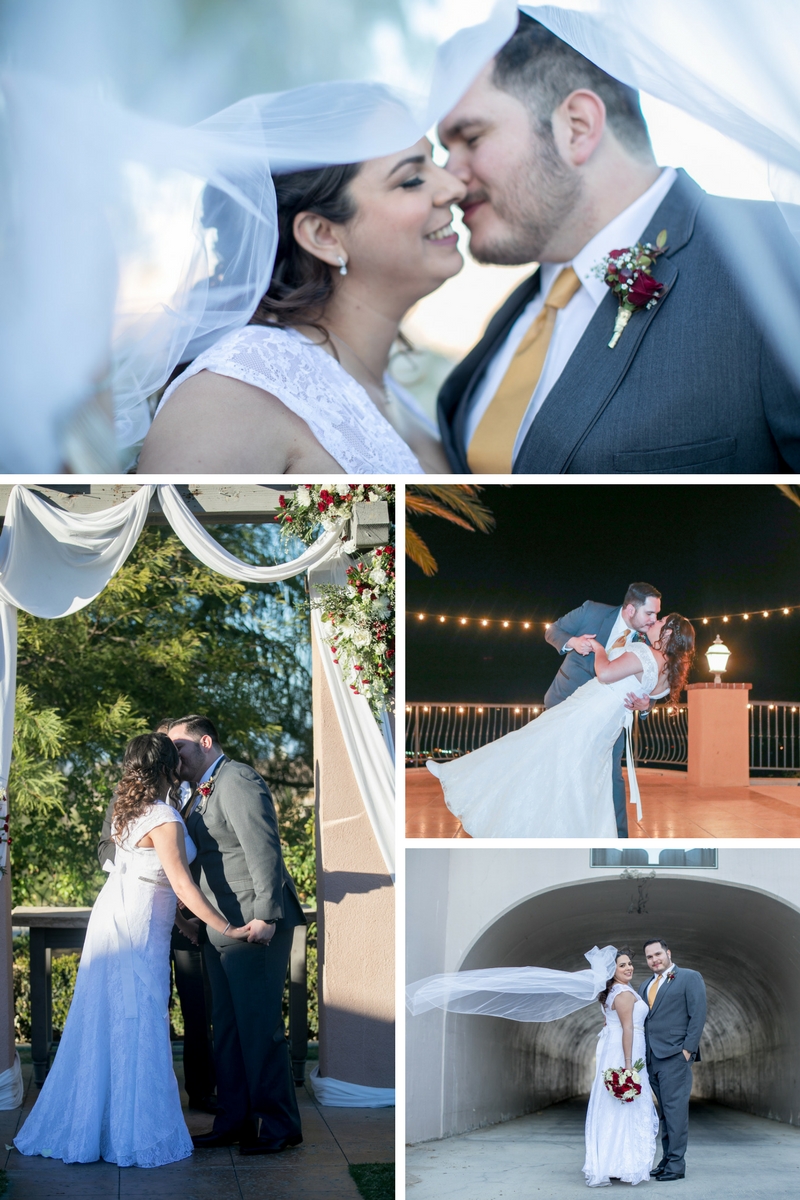 The Proposal
How they got engaged is actually Scarlett’s favorite. She had been stressing over her licensure test which she needed to take for work/career. Scarlett had Edgar drive her so that she could get a few minutes of studying in before she went inside. When she came out Edgar had flowers and chocolates waiting for her as a ‘congratulations’ or ‘it’s okay, you will pass next time’ gift. They went to Scarlett’s moms to tell her the good news of her passing the test. While they were there Edgar kept telling her that he wanted to show Scarlett something at the mall. She had no interest in going to the mall but Edgar said, “it’s something you have been asking me for!” Scarlett realized he was referring to a ring and so they went with Scarlett’s mom and stepdad. While they’re there Scarlett chose a ring which was double their budget and as Edgar stood there sweating bullets the transaction was completed. He told Scarlett that she could not have the ring until he officially proposed. Scarlett’s mother and her would give him suggestions as to when and how to propose (ie. during a sports event, during their planned vacation for new years, or something romantic) but definitely not on Christmas as they wanted their engagement to stand out. Every day Edgar would look at the ring which he had placed on their dresser. Scarlett would tell him to move it because when he was ready to propose she would know with its sudden disappearance. They had plans to go to a hockey game with Edgar’s company and 3 days before the event, the ring disappeared. Edgar became much more affectionate than usual and Scarlett knew something was up. Scarlett told people her theories and everyone tried to convince her that she was wrong. The day before the hockey game she was looking for her jersey and it is nowhere to be found. She went to her mom’s to look for it and Scarlett’s mom was acting bizarre and lecturing her about doing her hair before the game. She let her curl it and she took off a little late to the game. Scarlett met Edgar and his company at the game where he was now limited on words. All she would get were smiles, hugs, and kisses from him but no “do you want a snack, restroom” She got nothing from him. She knew for sure it was happening at that point, she just wasn’t sure if it would occur during or after the game but she knew it was happening that night. Suddenly, a worker approached Scarlett about being tonight’s “jersey winner”, but what did she see in his hands? It was her jersey with last’s year’s logo as it had recently been updated. The guy and her then-fiancé proceed to escort her to the stage where she was to be introduced and awarded “her prize”. As they are walking she was just nodding, smiling, and ready to laugh. The guy asked her if she knew what was happening and she said, “yes, but let’s go with this.” Scarlett had always stressed to her husband when it comes to engagements the two things people ask you is “how did he propose and can I see your ring.” The efforts Edgar had gone to for their engagement was just amazing. Scarlett was then announced and put on the jumbotron where the question appeared “Scarlett, will you marry me?”. Scarlett turned around and he was on one knee. She could barely hear him with all the noise in the stadium but it was perfect. He even had Scarlett’s mom and stepdad in the audience filming it and they put it on YouTube for our family around the world to be able to watch.

Wedding Inspiration
“We were inspired by the venues Spanish architecture and colors. We used burgundy, gold, and white as our color palette.” 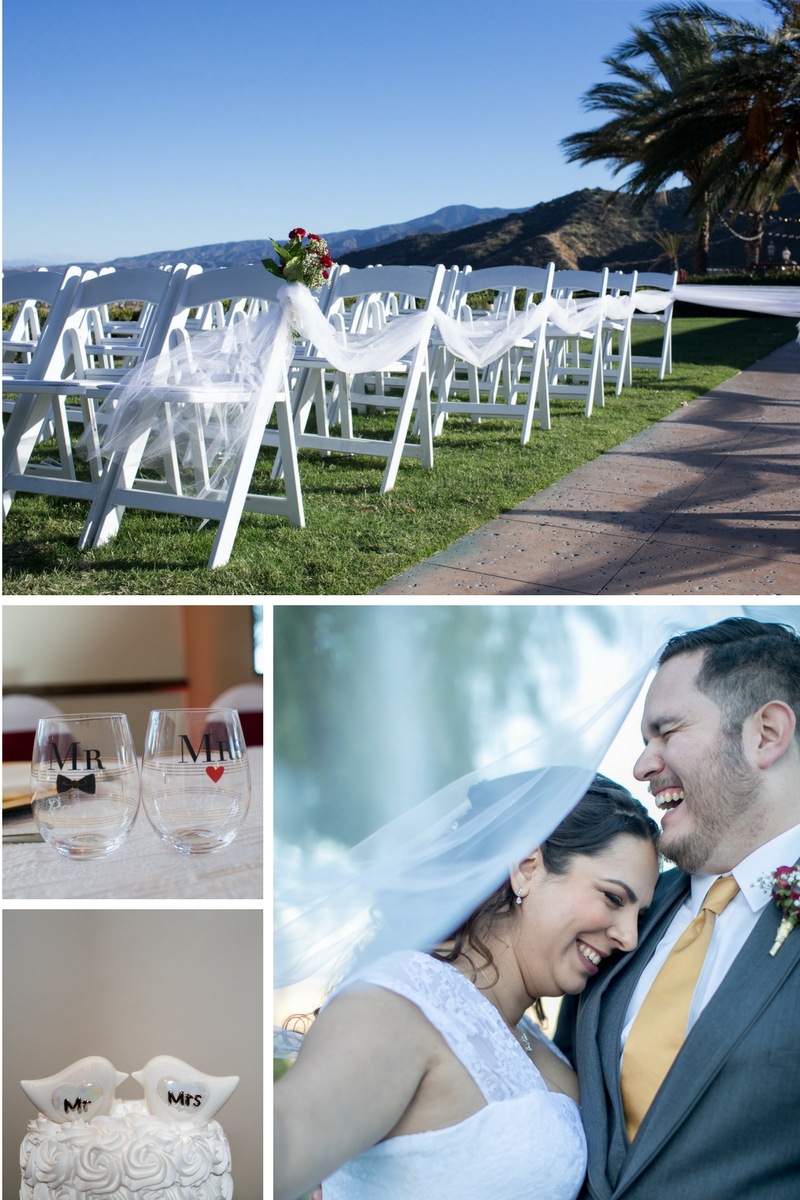 Favorite Wedding Detail
“We decided to do a choreography for our first dance which was beyond stressful as he is not a dancer and I hadn’t done choreography in over 10 years. The day before during practice we kept messing up and I was sure this was not going to go well on the big day. To my surprise we did the choreography perfectly and everyone was so surprised at how well we did. That was a nice memory because our song really did become our song with all the times we replayed it over the year of planning. Our guests loved the photobooth, bride/groom chocolate covered strawberries, and nitrogen frozen ice cream.” 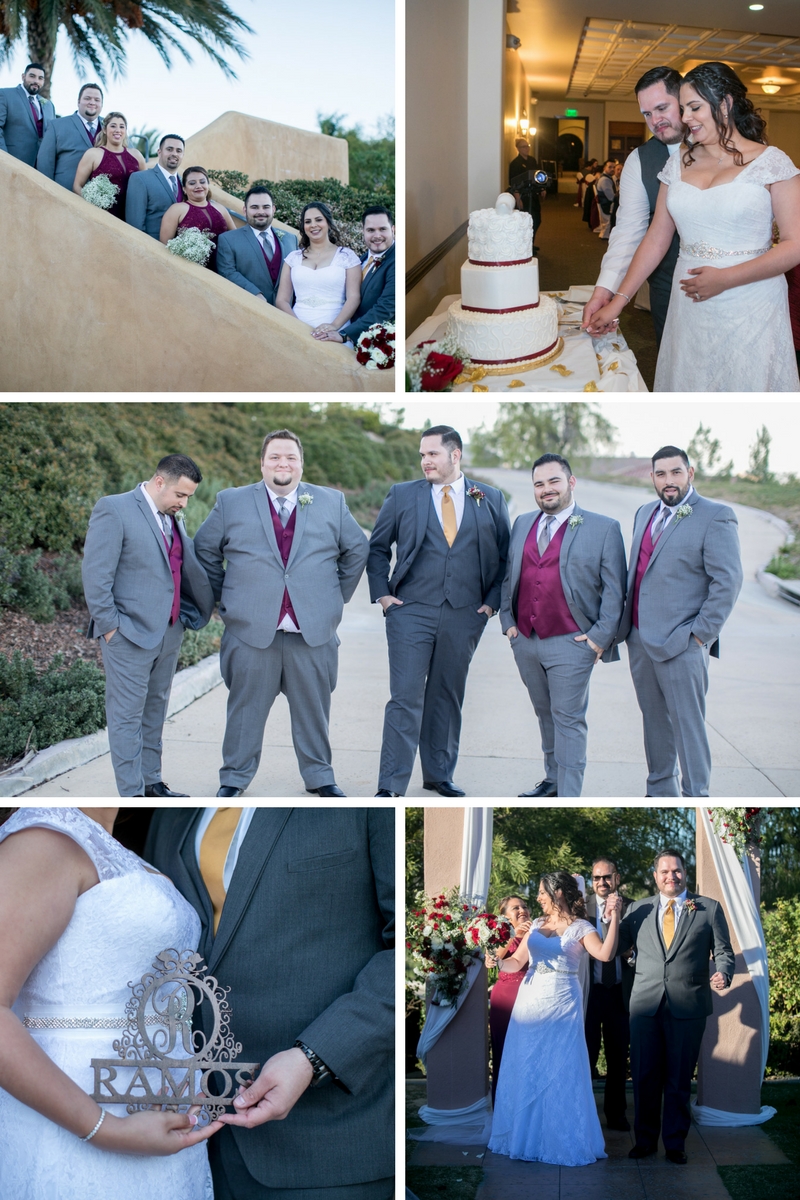 D.I.Y. Details
“I tried not to do too many D.I.Y’s as I did not want to be stuck working on anything the night before. What we did do was make a snapchat filter which matched our photobooth prints and bar signs.” 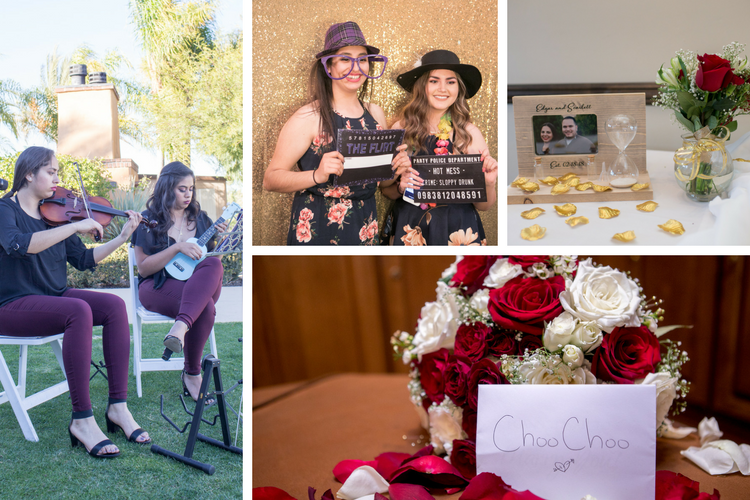 Favorite Wedding Memory
“We decided to do a choreography for our first dance which was beyond stressful as he is not a dancer and I hadn’t done choreography in over 10 years. The day before during practice we kept messing up and I was sure this was not going to go well on the big day. To my surprise we did the choreography perfectly and everyone was so surprised at how well we did. That was a nice memory because our song really did become our song with all the times we replayed it over the year of planning. Our guests loved the photobooth, bride/groom chocolate covered strawberries, and nitrogen frozen ice cream. “

& a Word of Advice…
“First of all, I would definitely suggest taking a couple of days of prior to the wedding, even if you think you have all your ducks in a row as small things do come up. Second, I would say to expect things to go wrong and just let it roll off your shoulders (ie. Our white limo was cancelled due to overheating and we were sent a black party bus instead). Third, ask your venue in advance if you are responsible for clean up and if so inform your bridal party to start cleaning up about 5 minutes before the Dj announces the last dance. Finally, get a DAY-OF-COORIDNATOR at the very least. Some venues offer one such as ours and it made such a big difference compared to other weddings I have been to which did not have one.”

“What I would like to share to all the Brides and Grooms is enjoy being engaged and on the day of remember to take a breathe and enjoy yourself. The day flies by so fast. I highly recommend a videographer even if it is just a family member doing Instagram/facebook live. Being able to watch it later is so enjoyable and sharing it with those who are not able to be there with you due to distance or finances is a great feeling as well.”